Categories Board Games Storm Above The Reich

Storm Above The Reich

Storm Above the Reich is a solitaire game depicting a Luftwaffe squadron of Fw190s struggling to deter and destroy the relentless daylight raids over Germany during World War Two. The player’s individual aircraft, each represented by a stickered block, must confront the mighty “combat box” formation of the United States Army Air Force, a deadly terrain of B-24 Liberator heavy bombers. Like its counterpart, Skies Above the Reich, the game is a broad strokes depiction that presents the arc of the desperate air war. Stretching from late 1942 to early 1945, Storm Above the Reich follows that trajectory in a series of missions strung together to make a campaign. Each mission will take a half hour or more to play, while a campaign can last anywhere between 6 to 60 missions.

Stand-Alone and an Expansion: Storm Above the Reich is a stand-alone game; you don’t need Skies Above the Reich to play. However, it can also serve as an expansion for that game. Storm uses the same rules as Skies, and components in one game transfer seamlessly to the other. Combined, Storm and Skies present eight formation maps, six pursuit maps, B-17s and B-24s. In Storm, you get an oversized staffel of 18 Fw190s, with the option of augmenting it into a Sturmbocke staffel. In Skies, you get a staffel of Bf109s, and with the games combined, the staffels can also be combined.

The Mission: You select pilots and “attachments,” such as gun pods, rockets, or added armor. You may also augment your attack with auxiliary aircraft such as Me110s, Bf109s, or later in the war, jet propelled Me163s, an erratic but powerful weapon. Time in a mission is limited, so you must do your best to wreck the bomber formation as quickly as possible, while bringing home as many pilots as you can in order to muster a force for the next mission.

The mission is played on a formation map that depicts as many as twenty-one B-24 bombers in a tight array. The game comes with two double-sided map boards (four maps in all) that as a set chronicle the development and increasing lethality of the bomber formation. Each map is a bigger and more lethal terrain than its predecessor. 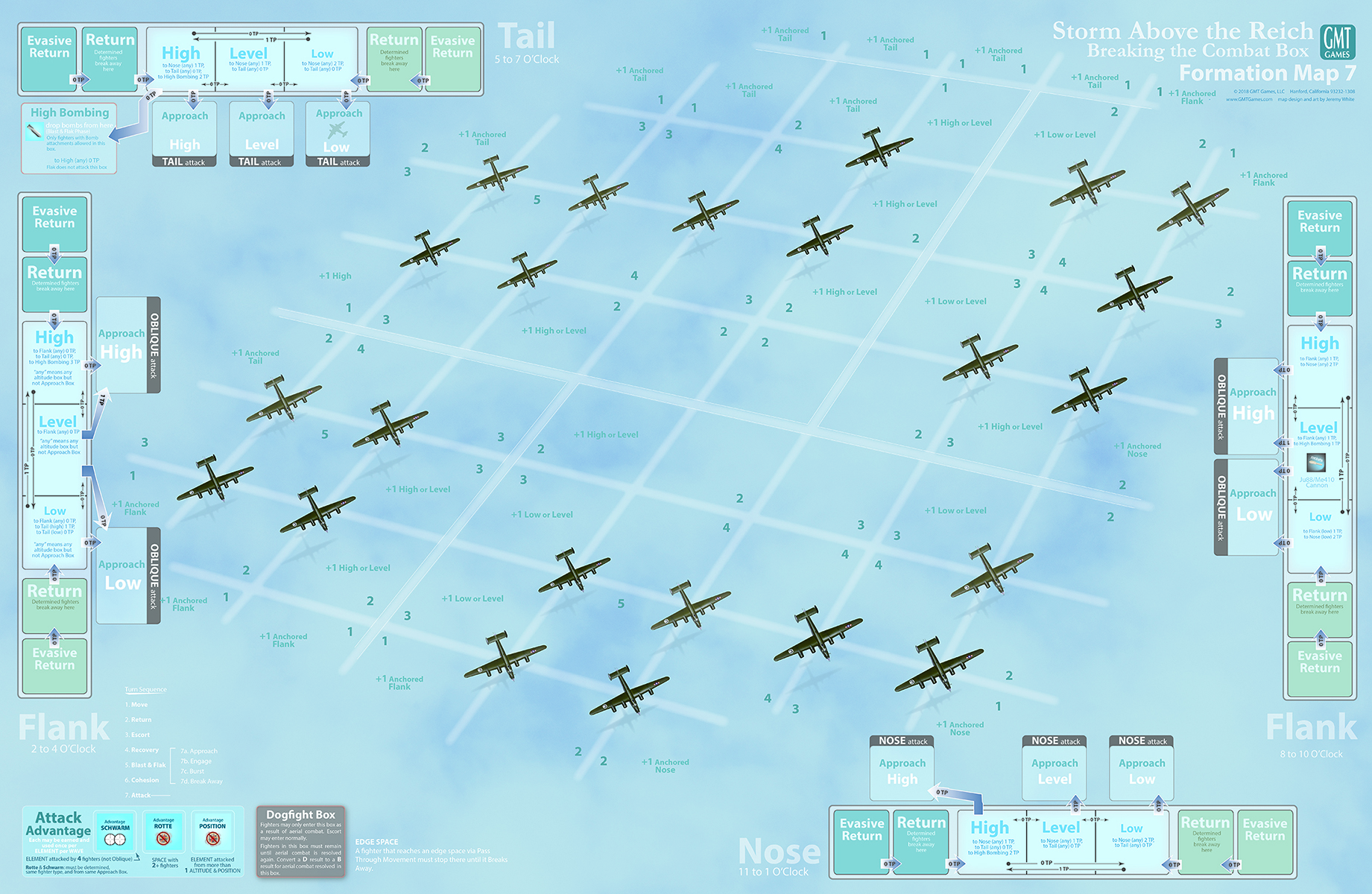 What if you encounter the bombers’ “little friends,” fighter escort lurking nearby? How will you handle them if you do, or will you even try? Will you organize part of your force to tangle with escort, or will you arm your entire contingent to focus on the bombers?

The Campaign: As tough as each mission can be, the real challenge is the campaign where you watch as your roster of pilots gradually shrinks. Some pilots will survive long enough to acquire ace skills, but you will be forced to replace downed or wounded pilots, and those young newcomers come “green”. Some campaigns will end simply because you run out of pilots. 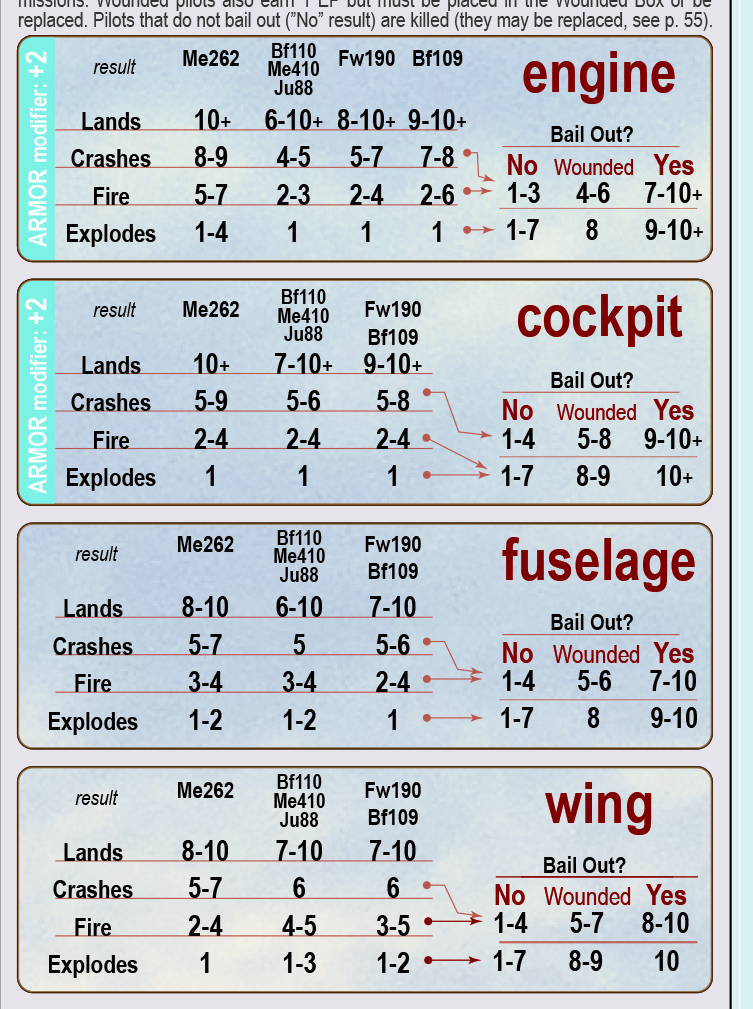 Full Campaigns follow the chronology of “seasons,” each comprising a number of missions that your squadron flies striving to disrupt the American bomber raids. In a full campaign you must endure all seven seasons, keeping your squadron intact while making an impact on the relentless wave of bomber formations roaring over your homeland. A short campaign challenges you to win a single season, although you may wish to extend it to a second or third season depending on how well you fare.

Each season represents a distinct period of the war, as the campaign traverses the history of the air war. Bombers become more heavily armed but so too do your own Fw190 fighters. Early seasons are characterized by smaller formations, while seasons in the middle of the war are notable for the lack of fighter escort. And later seasons will put the squeeze on your squadron.

Basic and Advanced Games: In the basic game, your goal is to knock bombers out of formation, or destroy them outright. The advanced game adds “pursuit” where you dispatch fighters to chase after and intercept bombers knocked out of the formation. Played out on an 8.5” x 11” map depicting a single bomber, pursuit makes the advanced game even more challenging. 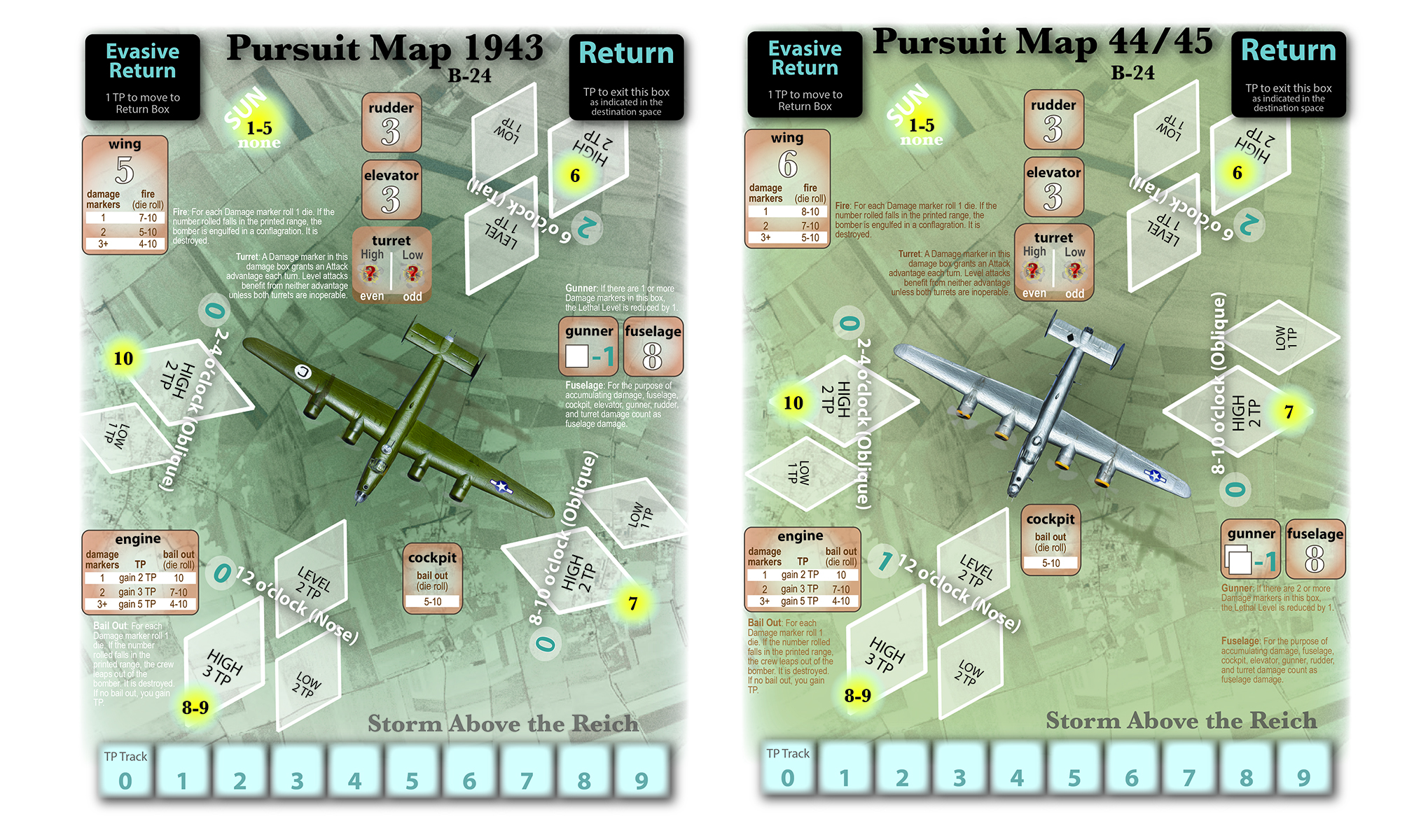 In Storm, you also get an expanded set of advanced rules that stretches a Mission to include the vector to the bomber formation where your fighters may themselves be intercepted by United States escort fighters. Will you devote some of your fighters to tackle American escort, leaving others equipped to attack the bombers? Will your Sturm 190s be able to fight their way through to the bombers or did you leave them vulnerable? And for those who already own Skies Above the Reich, in Storm you’ll find new Experte skills and green penalties, aft firing rockets for those Sturm 190s, as well as a feature exclusive to that fearsome machine – the “Aggressive Attitude” that augments its Determined Mode capabilities. Finally, the B-24 will be seen in Storm Above the Reich to fly a greater variety of formation patterns than in Skies, reflecting the USAAF’s experimentation with that heavy bomber. 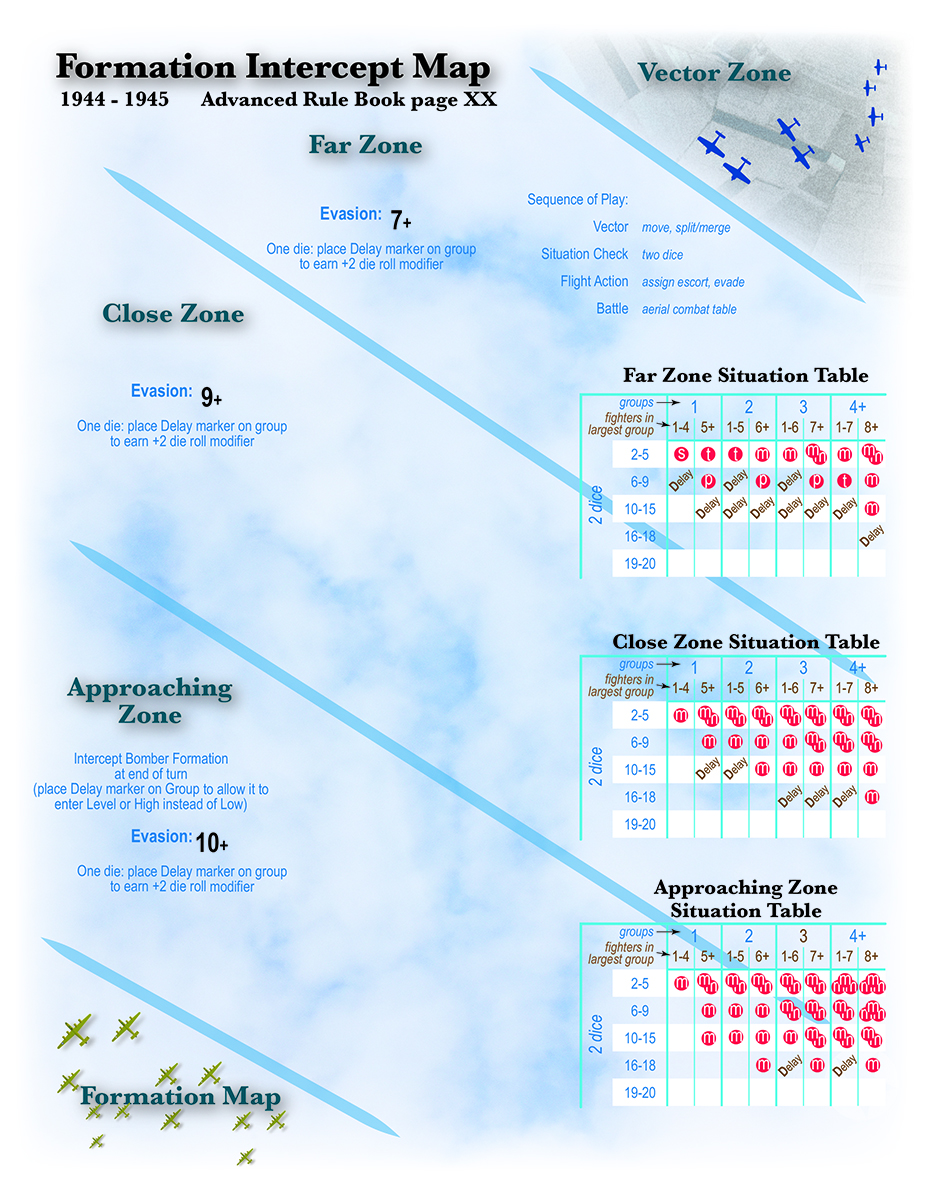 The Two Player Game: You may also play this as a (un)cooperative game. Players each command a squadron of fighters and attack a formation of bombers together. Although players may lose together, even if they win the campaign only one of them may be declared the victor.

Browse this category: Board Games